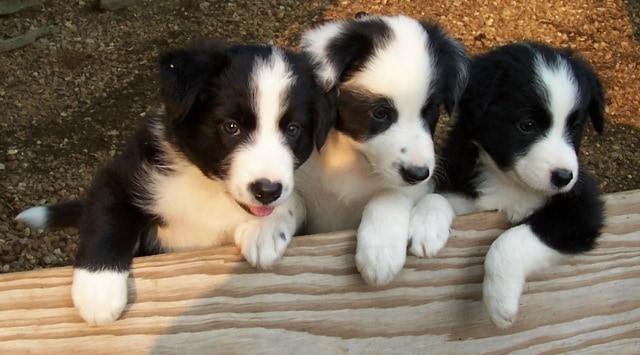 Socialization is exactly what it sounds like – learning how to live within society. As humans, we learn socialization so that we can live and work in our communities and get along with other people we encounter. When it comes to puppies, we actually demand quite a bit more than we do of other humans. We expect puppies to be able to coexist not just with their own kind, but with us, and with animals of completely different species. We expect them to be able to behave politely in a variety of different environments, and to accept as normal things that are essentially foreign to them.

Fortunately, most puppies are able to adapt to the unusual, and to come to accept it as normal. However, the older a dog gets, the less inclined he becomes to accept things that are different, novelties. An older dog becomes more suspicious, and less likely to be flexible. That’s why it’s so important to let young puppies get used to a variety of new sounds, sights, animals, and people that are going to form the fabric of his everyday life.

In The Handbook of Applied Dog Behavior and Training, author Steven Lindsay describes socialization as a process by which dogs learn to relate and communicate. In other words, they learn how to be a part of a society that includes not just other dogs, but a variety of people, environments, and other animals.

Most puppies are very adaptable. They’re hard-wired to be curious and to want to investigate things that they haven’t experienced before. It’s an age-specific, built-in function that works as sort of a “shock absorber” so that the puppy doesn’t run in panic every time he sees something different, a leaf falls, or someone new approaches. Of course, nature also builds in a healthy amount of prudence, so that a puppy is not likely to approach something that could cause him harm.

To a puppy, everything is new. Most things are exciting, and worthy of exploration. But of course, there’s a bit of caution built in as well, and a young puppy needs the guidance of his adult human to help him through the learning process.

When We Begin to Socialize Pups?

Keep in mind as you read this that socialization means more than just getting a puppy used to humans. We want to begin to build confidence in him very early on, and the process begins with new experiences before we start introducing humans and other animals into the mix.

We start handling our border collie puppies at birth. We begin introducing our puppies to new environments and experiences, just by taking then out of the whelping pen and cuddling him while relaxing in a chair. Later on, the puppies explore multiple environments, meet at least 50 new people, engage in different experiences, like adventure walks, swimming and car rides.

In fact, the earlier they start, the better. Puppies are very receptive to new experiences at 3 weeks, and by the time they reach 12 weeks, they’ll probably be letting you know that they’d love to explore! So seize the opportunity.

By the time a puppy reaches 18 weeks, you’ve closed the window of opportunity when it comes to introducing him to new things. At that stage, he’s going to be very cautious about anything he hasn’t already experienced. Fears that developed prior to 18 weeks are going to be entrenched, and could be very difficult to overcome.

Why Is Socialization So Important?

When a puppy is well-socialized, he is comfortable in virtually any situation, and unlikely to react with aggression or fear when encountering something new. Puppies that are properly socialized will not likely react badly to exuberant children, veterinary exams, and other stressful situations. Given that poorly socialized dogs are very prone to biting, and given that the American Veterinary Society of Animal Behavior reports that poor socialization is the number one reason why dogs are euthanized, you can see why it is so important to properly socialize your puppy.

1# reason why dogs are euthanized is poor socialization

Simply stated, a well-socialized puppy is more relaxed, more stable, and a better pet. This is because they’re comfortable in a variety of different situations, and less likely to react with fear or aggression than puppies that have not been properly socialized.

How Far Do I Need to Take This?

Much will depend on where you live, how many situations your puppy is likely to encounter in any given day, and how safe you want people to feel around your dog and vice versa. If you live in a subdivision where you’ll be encountering neighbors, and there are kids around, or if you like walking the dog around the neighborhood, you are going to have to work toward an increased level of socialization.  You want your dog to be comfortable, and you want the people he comes into contact with to feel comfortable as well.

What if He’s Afraid?

Some puppies need more work than others when it comes to socialization. Your pup may have entered a fearful phase around the time you get him. Most of the time, any puppy between the ages of 3 and 12 weeks is not going to object to being handled by another person, but if he is afraid, introduce him gradually. Sit away from the person you’re trying to introduce him to, encourage them to offer him treats, and move closer gradually. If he’s afraid of children, ask them to approach quietly, and again, encourage them to give treats. Dogs are very bribe-able and will usually overcome their fear quickly given the right motivation.

Take Him to School

One of the best ways to socialize your puppy is to take him to school. Your local kennel club may offer puppy kindergarten, which is a special sort of class designed specifically for socialization. Your puppy will be able to play off-leash with other puppies, and also meet a lot of humans. Some puppy kindergartens even offer basic obedience training, so in addition to becoming socialized, he’ll learn a few things too.

*We insists that our puppies continue their social skill building with a puppy socialization class or manners class.

Keep current with the Vaccinations

You really can’t begin socializing too soon, but puppies generally need an initial shot and then a booster to be fully immunized against various illnesses. That doesn’t mean that you can’t take your puppy to kindergarten – he will have some level of immunity, and the risk of contracting a disease is actually minimal, especially when you compare it against the risk of developing serious behavioral issues down the road if he isn’t properly socialized.

Remember, socialization has to be done early on, so don’t keep your puppy away from other dogs out of fear that he will contract an illness. The chance of him doing so is slim to none. Also, you’ll be in an environment with other people who are equally concerned about their puppy’s health, so chances are that they will all have had their initial shots. If you’re worried about it, ask the trainer who is conducting the puppy kindergarten what the requirements are for shots, talk to your veterinarian and proceed accordingly.

*We would suggest, though, that you avoid dog parks. Adult dogs at the park may or may not have been vaccinated. And also, you don’t know the behavior of the dogs at the park. Far better to have your little one in puppy kindergarten in the early stages than in an environment with adult dogs whose behavior may be unpredictable.

As we’ve previously stated, behavioral issues are a huge reason why dogs end up being euthanized. So socialize your puppy early – expose him to humans other than yourself, and to other animals. Don’t take risks, though. Choose a safe environment like a puppy kindergarten. Most puppy kindergartens will accept dogs as young as 7 weeks. You will be expected to keep your puppy up to date on his vaccines and de-wormings throughout his enrollment, though.

Don’t stop at kindergarten either. Take your puppy to the mall, the hardware store, the baseball field, and anywhere else that people hang out. Ask your kid’s teacher if it’s okay to bring the puppy to school during recess. Invite your neighbors over to pet your puppy. Most people won’t be able to resist, and you’ll be exposing your dog to all kinds of human interaction. Encourage children to pet him, and to be gentle with him.

It’s amazing the things that can frighten puppies: babies, people in wheelchairs, disabled people, people clapping or yelling, other animals, ice or gravel, lawn mowers, stairs, you name it. Your job as your dog’s human is to help him understand and accept the things that startle or confuse him. Most of the time, these are things that trouble puppies, and proper socialization will work wonders to make your puppy feel more at ease. Sometimes, though, things can trouble adult dogs as well, and further work on socialization may be needed.

Whether issues occur early in your dog’s life or later on, they have to be dealt with. The last thing you want is to have a dog that is going to freak out over every little thing, feel horribly stressed, and cause discomfort to those around him. So start early with the socialization, and if you need to, do a refresher course later on in your dog’s life. A checklist is always useful, because it shows you where you’ve been, where you are, and where you need to go.

Socialization is absolutely essential when it comes to helping your puppy become a good canine citizen. It’s not easy living with a dog that is afraid of people and unusual circumstances, and you can assume it’s also not easy being a fearful dog. So, for the sake of your dog, yourself, and the people who are likely to encounter your dog, make sure that you work on socialization in the early months.  You’ll have a happier dog, and you’ll experience a lot less stress. A well-socialized dog will be comfortable wherever he is, and will be a pleasure to be around.